As a gamer, game master and former (minor) game developer I am always interested in ideas and concepts that make a game out of an activity. In this case, I stumbled upon a blog about game programming patterns. This particular blog post is all about the random generation of dungeons. It is really an interesting read and you can retracte the several steps as the author, Bob Nystrom, made a simulation for every necessary step. Really nice!

One of my earliest memories of computing is a maze generator running on my family’s Apple IIe. It filled the screen with a grid of green squares, then incrementally cut holes in the walls. Eventually, every square of the grid was connected and the screen was filled with a complete, perfect maze.

My little home computer could create something that had deep structure—every square of the maze could be reached from any other—and yet it seemed to be chaotic—it carved at random and every maze was different. This was enough to blow my ten-year-old mind. It still kind of does today.

Stuff with Stuff: Rooms and Mazes: A Procedural Dungeon Generator 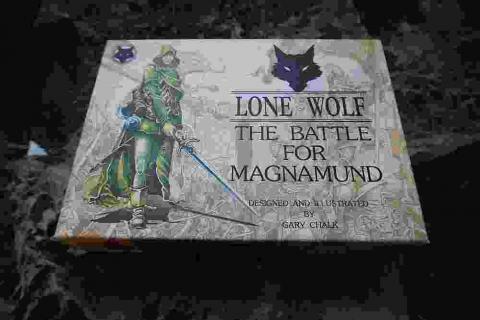 Some time ago, I stumbled upon the Lone Wolf Boardgame Kickstarter project which was recently funded (they are always already funded or at least ended when I find them). Luckily, I could preorder it which seemed to be a useful way to
a) instrumentalize my current euphory to spend money for the board game
b) give my support to the project team and especially the inventor and main artist of the game, the original Lone Wolf illustrator Gary Chalk
c) get the game after release without having to remember it a year later

Unfortunatley, this was the first Kickstarter project I experienced by myself (although I have not funded it, it felt like this). The main problems seemed to be in the communication between the project partners, Graywood Publishing and Megara Entertaintment, as well as some errors in creation. By accident, the game board was produced in a too good quality, so it raised the shipping costs as the games weight increased significantly. I could live with all this and I was not sorry to wait longer for the game, especially with this quality and the beautiful illustrations by Gary. But the thing that was really sad to see was the conflict emerging between Graywood and Megara. This was neither necessary nor helpful but it was a mess to watch this helplessy. Some of the project posts just consisted of washing dirty linen in public. Guys, I really hope you will come together one day and talk this out. You made a wonderful game and set a monument for a beloved artist. Being in contact with you was always a pleasure. I finally got my game and the quality is the best I have seen for a board game so far. Be proud of it!

Do you know Lone Wolf? It is one of the most famous adventure book series ever and was pretty popular among fantasy interested teens in the late eighties resp. early nineties. I loved them. I played them hundred of times. They were the best. I also tried some other books, obviously by the founders of the genre but I didn't find them as intriguing and fascinating as the books about Lone Wolf. Long story short: Lone Wolf is the last survivor of the order of the Kai lords which may be described as medieval jedi-eske warrior monks with super powers. Lone Wolf got to end his training by himself, revive the order of the Kai Lords and find Dark Lord Gnaag to end his tyranny and take revenge.

Ok, writing this it sounds pretty standard. There may be several reasons why I judge this as great nevertheless.

1. There was no Harry Potter and no Star Wars Prequel (nor Sequel) and no Lord of the Rings (nor Hobbit) Blockbusters, so finding revenge by killing someone called Dark Lord was not sooooo omnipresent as it may seem today.

2. I was around 12 years old, so this was prette much the beginning of my journey through fantasy literature and roleplaying games.

3. The quality of those 12 books (1) , written by Joe Dever and majorly illustrated by Gary Chalk, was higher than my 2 lines sum up could ever be. Telling you there is a Dark Lord to be killed is a lot less interesting and intruguing than surviving 12 interactive and brillantly written books full of deadly traps and mysterious encounters in order to kill the Dark Lord finally by yourself.

By the way, there is a pretty new release of the books, if you are interested. I can totally recommend them. OR you could play the interactive eBook, which seems to be half book and half RPG. Looks good aswell.
AND I have seen there are new books (in form of conventional fiction), co-written by the grandmaster Joe Dever himself. I should risk a look myself, I guess. This is also true for the games that have never been translated to German.

Oh, yeah, AND you can read my post on the Lone Wolf Boardgame. Soon.

Last weekend I bought a collection of 11 Tomb Raider games via humble bundle and am quite happy as I missed some of them like old friends - especially the first level of TR 2 which I played hundreds of times as a demo on my first iMac back in 1999. As a matter of fact, I still know every detail of the first minutes with a degree that is only compareable to Super Mario Bros 1-1 and the first level of Mirror's Edge. Well, saying this, I stumbled upon this really interesting interview with game character writer Rhianna Pratchett, known for Faith from Mirror's Edge and, of course, Lara Croft in the first part of the reboot. It deals with a wide range of topics like the differences between male and female characters, guys with boobs, LGBT character designs and cultural baggage:

I didn’t want to just make Lara a male character with boobs. It’s always kind of a…it is a human story at heart. But there things—the language she uses, or the way that she interacts—that could be said to be more feminine. I’m very much not talking about her sense of vulnerability or being scared. That again has been rolled out as: male characters aren’t shown as being scared or vulnerable, why should female characters? Well, just because it hasn’t been done with male characters doesn’t make it wrong! It’s probably more of a problem of the way we depict male characters.

Kill Screen: Tomb Raider writer Rhianna Pratchett on why every kill can't be the first and why she hoped to make Lara Croft gay

We need a better way to write about games. I don’t mean a new form of journalism. I’m not seeking the Lester Bangs or Pauline Kael of video games. My point is much simpler.

For a long time we’ve tried to make games align with our critical sensibilities. We’ve focused a dramaturgical lens on narrative games; we’ve applied film theory to cinematic games; we’ve examined games as rhetorical systems; and we’ve tried to understand the systemic principles that define games. These are worthy efforts, not a waste of time. We each shine the light we own.

Regardless, judging from the relatively low number of shops available (and considering that some of them even had their entrances hidden from first sight), it's assumed that the heavy presence of monsters and wild creatures has severely affected the different businesses. And even after Link manages to defeat Ganon, Hyrule still has a long way to go before restoring itself (as revealed by the instruction manual of The Adventure of Link. In this second game, Rupees have disappeared completely; no shops are seen in any of the current eight towns of the land, not even money-based trades are made, and therefore Link doesn't collect the legendary and long-lasting, yet ultimately deceased currency.

It is precisely this self-contained, quasi-military structure that has allowed Bowser to remain a thorn in Princess Peach's side for this long, culminating in his kidnap of her, in an attempt to force her to marry him and therefore achieve "legitimate" control over the kingdom. Only the intervention of the independent oligarch (or "war-chief," depending on your point of view) known as "Mario"—see below—prevented this from occurring.

What Is the Political Situation in the Mario Universe?

The sense of immersion in role-play and computer games is sometimes viewed as dangerous, as players’ strong perceptions of fictional worlds are assumed to make them lose contact with reality. On the other hand, players’ immersion also implies a potential for improved learning, since it enables them to ‘experience’ new places and historical eras. Yet a new study from the University of Gothenburg, Sweden, shows that immersion in online role-play games requires a lot of hard work.

Creativity and linguistic skills important for immersion in World of Warcraft