Not only for foreigns speakers, it is impossible to guess the correct pronounciation (i.e. a pronounciation that is considered correct by a group of native speakers) of a given English word just by its spelling. This is a fact and if you don't believe me read the following poem by Gerard Nolst Trenitéout loud:

Dearest creature in creation,
Study English pronunciation.
I will teach you in my verse
Sounds like corpse, corps, horse, and worse.
I will keep you, Suzy, busy,
Make your head with heat grow dizzy.
Tear in eye, your dress will tear.
So shall I! Oh hear my prayer.
Just compare heart, beard, and heard,
Dies and diet, lord and word,
Sword and sward, retain and Britain.
(Mind the latter, how it’s written.)
Now I surely will not plague you
With such words as plaque and ague.
But be careful how you speak:
Say break and steak, but bleak and streak;
Cloven, oven, how and low,
Script, receipt, show, poem, and toe.
Hear me say, devoid of trickery,
Daughter, laughter, and Terpsichore,
Typhoid, measles, topsails, aisles,
Exiles, similes, and reviles;
Scholar, vicar, and cigar,
Solar, mica, war and far;
One, anemone, Balmoral,
Kitchen, lichen, laundry, laurel;
Gertrude, German, wind and mind,
Scene, Melpomene, mankind.
Billet does not rhyme with ballet,
Bouquet, wallet, mallet, chalet.
Blood and flood are not like food,
Nor is mould like should and would.
Viscous, viscount, load and broad,
Toward, to forward, to reward.
And your pronunciation’s OK
When you correctly say croquet,
Rounded, wounded, grieve and sieve,
Friend and fiend, alive and live.
Ivy, privy, famous; clamour
And enamour rhyme with hammer.
River, rival, tomb, bomb, comb,
Doll and roll and some and home.
Stranger does not rhyme with anger,
Neither does devour with clangour.
Souls but foul, haunt but aunt,
Font, front, wont, want, grand, and grant,
Shoes, goes, does. Now first say finger,
And then singer, ginger, linger,
Real, zeal, mauve, gauze, gouge and gauge,
Marriage, foliage, mirage, and age.
Query does not rhyme with very,
Nor does fury sound like bury.
Dost, lost, post and doth, cloth, loth.
Job, nob, bosom, transom, oath.
Though the differences seem little,
We say actual but victual.
Refer does not rhyme with deafer.
Fe0ffer does, and zephyr, heifer.
Mint, pint, senate and sedate;
Dull, bull, and George ate late.
Scenic, Arabic, Pacific,
Science, conscience, scientific.
Liberty, library, heave and heaven,
Rachel, ache, moustache, eleven.
We say hallowed, but allowed,
People, leopard, towed, but vowed.
Mark the differences, moreover,
Between mover, cover, clover;
Leeches, breeches, wise, precise,
Chalice, but police and lice;
Camel, constable, unstable,
Principle, disciple, label.
Petal, panel, and canal,
Wait, surprise, plait, promise, pal.
Worm and storm, chaise, chaos, chair,
Senator, spectator, mayor.
Tour, but our and succour, four.
Gas, alas, and Arkansas.
Sea, idea, Korea, area,
Psalm, Maria, but malaria.
Youth, south, southern, cleanse and clean.
Doctrine, turpentine, marine.
Compare alien with Italian,
Dandelion and battalion.
Sally with ally, yea, ye,
Eye, I, ay, aye, whey, and key.
Say aver, but ever, fever,
Neither, leisure, skein, deceiver.
Heron, granary, canary.
Crevice and device and aerie.
Face, but preface, not efface.
Phlegm, phlegmatic, ass, glass, bass.
Large, but target, gin, give, verging,
Ought, out, joust and scour, scourging.
Ear, but earn and wear and tear
Do not rhyme with here but ere.
Seven is right, but so is even,
Hyphen, roughen, nephew Stephen,
Monkey, donkey, Turk and jerk,
Ask, grasp, wasp, and cork and work.
Pronunciation (think of Psyche!)
Is a paling stout and spikey?
Won’t it make you lose your wits,
Writing groats and saying grits?
It’s a dark abyss or tunnel:
Strewn with stones, stowed, solace, gunwale,
Islington and Isle of Wight,
Housewife, verdict and indict.
Finally, which rhymes with enough,
Though, through, plough, or dough, or cough?
Hiccough has the sound of cup.
My advice is to give up!!!

And if you have no clue how to pronounce some of the words, take advise from this video: 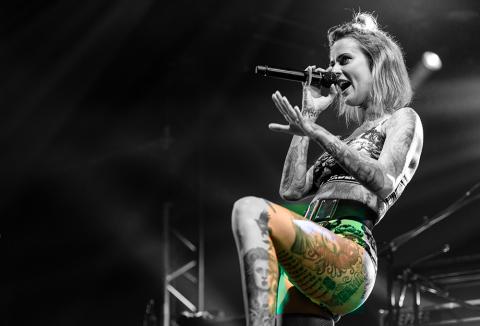 As you may remember, I posted an article on a Rilke quote tattoed on Lady Gaga some time ago. (And there is another interesting post on Rilke and the series "The Magicians" as well). But the other day I stumbled upon the fact that the heavy tattooed German singer Jennifer Weist from the band Jennifer Rostock has a literary tattoo on her leg aswell, see photo. In this case, it is not Rilke, but a slightly modified quote from the movie "The Last Unicorn" or may be the book by Peter S. Beagle.

The full version is interrupted by the butterfly and resolutes the pronous "Er" and "Sie" with "der rote Stier" (the red bull) and "Die Einhörner" (the unicorns) and you can listen to the text, which is told by the singing butterfly right at the beginning of the movie, in this gruesome edited clip (at 3:30):

The English transcription is, according to scifiscripts as follows:

So the tattoo would be in English:

You can find the others
if you are brave.
They passed down all the roads
long ago.
He ran close behind them
and covered their footsteps.
His firstling bull has majesty,
and his horns are the horns
of a wild ox. With them,
he shall push them, all of them,
to the ends of the earth.

I really love the movie and think that Jennifer took an impressive choice with this quote - I would have never ever even come to the idea to chose this quote as a tattoo - but now as I see it I really adore it and its message, style and tone.

There are two other tattoos by Jennifer Weist I have been interested in. The one is a songtext right down at her ankle of the other leg. It's "Comin' home" by City and Color, a really beautiful song about someone travelling the world by always longing to come home.

The other one is a combination of four obviously meaningful symbols on her side (take a look here at Jennifers Instagram account) . Although I spent quite a lot of time on it, I was not able to decode them satisfactorily. One idea I came up with is that the symbols are alchemical symbols for the four elements, although one has to change alphabets to read them (i.e. there is no single alphabet of alchemical symbols that contains all four of them). Another idea would be planets, but I haven't found them neither.

So, this remains mysterious for me. The four elements, btw., are generally represented symbologically like this:

So, after all this discussion on tattoos on Jennifers body, I want to get you an impression of Jennifer Weists art: she is one of the best German writers and has a very impressive voice. This is my favorite song by Jennifer Rostock, "Schlaflos":

And the lyrics with translation:

Two words: Lara Croft. OK, stop there. What did you see? An image will undoubtedly have flashed into your mind. She is, after all, one of gaming's most widely-recognised characters, so you almost certainly have an idea of who 'Lara Croft' is. Yet her appearance and personality have changed so dramatically over the past 19 years, there is arguably no single Lara Croft.

Gamesradar+ Think you know Lara Croft? Don't be so sure...

Oh thank you, dear Justin Towell - this is such an interesting topic.

So, who is my personal Lara Croft? It is certainly not the innocent girl in the reboot - who needs to be nearly raped in order to become a mass murderer. Don't get me wrong: I think the "reboot" called Tomb Raider is a fabulous and fun game with an intense Tomb Raider-feeling - but it has little to do with "Lara Croft".

For ME, the most defining Lara Croft was the one from Tomb Raider comics I read in the early 2000s. Here, Lara is a mix between the women in Tomb Raider 1 to 3: Highly educated, rich, privileged - i.e. she does what she does but not for money nor fame - she is not corruptable, but so dawn curious and ambitious that she travels the world, risking everything for an object or story that just is interesting for her. Saving the world - if necessary .
Sometimes she has a bit of James Bond - but in general she is just an adventurer with the heart on the right spot.
And: sometimes she is more ruthless when it comes to enforcing the victory than the other famous adventurer and archeologist, Indiana Jones (who was not so innocent at all).
I think that was the heroine who was able to become worlds most known female computer game character, as she was different than any other. Beautiful and sometimes oversexed, yes, but there are a lot of beautiful and sexy women in gaming. It needs more to become Lara Croft.

As the end of the year is coming closer I wanted to share my new favorite palindrome with you. As you may know, a palindrome is a word or a sentence (or "string of characters ") which reads the same backward or forward. Unfortunatley, it is in German. But if you are not able to understand it, at least be impressed by this very special palindrome. I provide a translation afterwards so you might see, that it is not totally foolish text. And yes, my favorite English palindrome stays "A man, a plan, a canal - Panama"...

So here it is:

or, if you prefer it backwards:

It is attributed to Oscar Herbert Pfeiffer and I found it on Gnudung.

Some additional remarks:
1) As a German I seem to be obliged to mention that "Reliefpfeiler" is a) one of the longest German one word-palindromes and was b) "invented" by Goethe (although Wikipedia states I) it was Schopenhauer and II) that this is not the truth). I am not sure if this is true or interesting but several teachers in my life seem to care about this.

2) Weird Al Yankovich made a song out of Palindromes. It goes something like this:

3) There are also Palindrome novelles. According to Wikipedia, there is e.g. the novel "Dr Awkward & Olson in Oslo" by Lawrence Levine from 1986 containing 31,954 bidirectional words, take a look at it here at DigitalCommons.

Isaac Asimov's First Law of Robotics states that "a robot may not injure a human being or, through inaction, allow a human being to come to harm." That sounds simple enough — but a recent experiment shows how hard it's going to be to get machines to do the right thing.

Finally I got it, thanks to Ned Batchelder

Philipp Koehn - Informatics from Research in a Nutshell on Vimeo.

Hi, my name is Daniel Stein. This is my personal blog on gaming, science, linguistics and stuff.