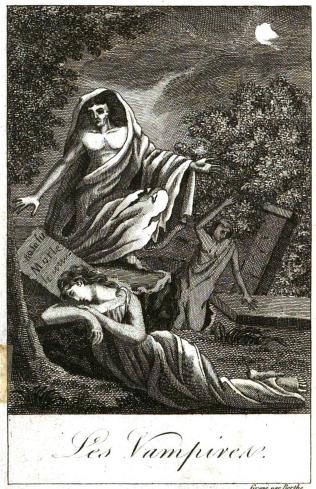 A surprisingly large number of academic studies—as in, more than one—have applied mathematical modeling to the concept of human-vampire co-existence. Using the depiction of bloodsuckers in various forms of media, from Bram Stoker's Dracula to True Blood, these papers look at whether Earth's vampire population would inevitably annihilate humanity, and, if so, how long it would take.

This article of Atlas Obscura presents an interesting history of mathematics dealing with the transylvanian problem of renewable resources. Great lecture!

Atlas Obscura: HERE'S HOW LONG IT WOULD TAKE FOR VAMPIRES TO ANNIHILATE HUMANITY

In regard of Star Wars there are quite some things to say, always. For the time being, I want to keep it short with those two interesting facts. They concern the in-time chronological first three movies:

As the end of the year is coming closer I wanted to share my new favorite palindrome with you. As you may know, a palindrome is a word or a sentence (or "string of characters ") which reads the same backward or forward. Unfortunatley, it is in German. But if you are not able to understand it, at least be impressed by this very special palindrome. I provide a translation afterwards so you might see, that it is not totally foolish text. And yes, my favorite English palindrome stays "A man, a plan, a canal - Panama"...

So here it is:

or, if you prefer it backwards:

It is attributed to Oscar Herbert Pfeiffer and I found it on Gnudung.

Some additional remarks:
1) As a German I seem to be obliged to mention that "Reliefpfeiler" is a) one of the longest German one word-palindromes and was b) "invented" by Goethe (although Wikipedia states I) it was Schopenhauer and II) that this is not the truth). I am not sure if this is true or interesting but several teachers in my life seem to care about this.

2) Weird Al Yankovich made a song out of Palindromes. It goes something like this:

3) There are also Palindrome novelles. According to Wikipedia, there is e.g. the novel "Dr Awkward & Olson in Oslo" by Lawrence Levine from 1986 containing 31,954 bidirectional words, take a look at it here at DigitalCommons.

Natural languages (and some planned languages as well) bring forth strange flowers from time to time. For example, in many languages there exist sentences that are built of the same word or syllable all over. Let's call it a "repetion play" and take a closer look:

The following is a Chinese poem that tells the story of a poet who is craving for lion flesh while living in a cavern. This is an incredible example of those repetition plays and only possible due to the Chinese distinguishment of word by tone pitch. The following table shows the poem in Traditional Chinese, in Pinyin transliteration and as a translation, on the Wikipedia page you can also hear a native speaker reading it out.

In contrast, the Japanese example works not due to same syllables with different pitch but with different ways to read the same Kanji 子. There is a story around this sentence and the scholar Ono no Takamura meeting the emperor Saga Tennō. Here you can see the sentence as a seemingly meaningless repetition of the Kanji, the way to pronounce it correctly next to the way to write it normally as well as the translation.

My favorite blog on nerdy things io9 came up with this some days ago with the english-centric title The most confusing sentence in the world uses just one word. But I have to admit: It is really confusing. Here, neither graphemes nor sounds are the source of confusion, but classical homonymy, i.e. the same word bears several meanings. This special sentence has its own website hosted by its inventor, linguist William J. Rapaport from the State University of New York at Buffalo with a complete history, many examples and discussions. Here you see the sentence, a (shortened) parse tree visualization of its parts of speech and a "translation" to understand the somewhat constructed meaning.

In most cases, German needs a small introduction in order to get a repetition play working, as in "Wenn Fliegen hinter Fliegen fliegen fliegen Fliegen Fliegen nach." which means thas flies flying behind other flies are flying behind other flies. But I have also found an example that comes without other words and makes also use of the homonymy. The content, however, is even weirder than in the English example...

I invented such a repetition play by myself. It is based on the nesting of clauses and the use of similar light verbs, so it is a bit different from the others:

Ook! is a so called esoteric programming language and is a derivate of another one called (rightly) brainfuck. As programming languages can be understand as planned languages and as Ook! was designed in order to be understood at least by orang-utans I think it is only fair to consider it here. I present an example code to write the famous "Hello World" program next to the basic programming cocepts and the omitted output:

One question remains: Why are so many animals involved in this...?

Almost all examples are extracted from Wikipedia and I have placed the respective links in the text before.

Via Twitter I stumbled upon the Reverse OCR bot yesterday. The bot itself states its mission like this:

I am a bot that grabs a random word and draws semi-random lines until the OCRad.js library recognizes it as the word.

And indeed, it is pretty interesting to follow those inexplicable lines which the OCRad algorithm identifies as words. You get a glance on why it is so difficult to write a good OCR system although most of us can parse text without any afford.

Darius Kazemi, the man behind Reverse OCR is an internet artist. On his website "Tiny Subversions" he lists a lot of other werid stuff he created, e.g. a bot that shops random stuff at amazon or a tool for creating presentations using the first image of a google search to a given list of topics.

Isaac Asimov's First Law of Robotics states that "a robot may not injure a human being or, through inaction, allow a human being to come to harm." That sounds simple enough — but a recent experiment shows how hard it's going to be to get machines to do the right thing.

It is harder than one would guess, but: Can you tell if this is a fictional character/thing or the brand of a drug? Great quiz (and great text!) at Lexicon Valley

2. Arborlon: City? Or cream for itching?

In shaping his vision of Middle-earth, Tolkien sometimes ran into "difficulties" of a scientific nature. One he frankly and openly admitted was in the area of biology: "Elves and Men are evidently in biological terms one race, or they could not breed and produce fertile offspring – even as a rare event: there are two cases only in my legends of such unions, and they are merged in the descendents of Eärendil." Given his mindfulness of natural laws, one may ask did Tolkien incorporate astronomical lore and fact into his universe? The answer is, in far more ways than can possibly be explored in a talk of this length. Astronomy helped, and haunted, Tolkien as he set out to develop his universe – or Eä, as the Elves would say.

Regardless, judging from the relatively low number of shops available (and considering that some of them even had their entrances hidden from first sight), it's assumed that the heavy presence of monsters and wild creatures has severely affected the different businesses. And even after Link manages to defeat Ganon, Hyrule still has a long way to go before restoring itself (as revealed by the instruction manual of The Adventure of Link. In this second game, Rupees have disappeared completely; no shops are seen in any of the current eight towns of the land, not even money-based trades are made, and therefore Link doesn't collect the legendary and long-lasting, yet ultimately deceased currency.